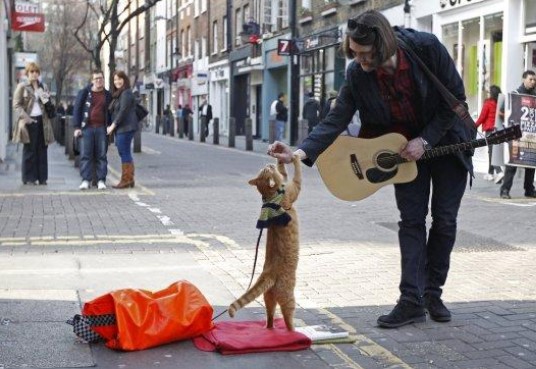 A homeless musician James Bowen found a cat in the subway that was suffering from a wound in the leg. It possibly came from a cat fight but the stray cat needed help. James spent his last money on a visit to the vet to treat the cat’s injured leg. James named his new friend after the Twin Peaks character Killer Bob.

"I would never have turned my life around if it hadn’t been for him" ,he says. "I had to be responsible as he needed me to look after him. Everything positive in my life can be traced back to that... His influence on my life has been extraordinary. He’s my best friend".

And the cat has literally changed James's life for the better. Bob the cat followed James everywhere and revenues dramatically increased for James. The homeless man penned his story in eight books, including the world famous " A Street Cat Named Bob", that have sold nine million copies in more than 40 languages. These books are about their adventures on the street together and how the animal rescued him from a life of homelessness and addiction.

A film based on James and Bob’s stories won best British film at the National Film Awards in 2017.
Source: https://metro.co.uk