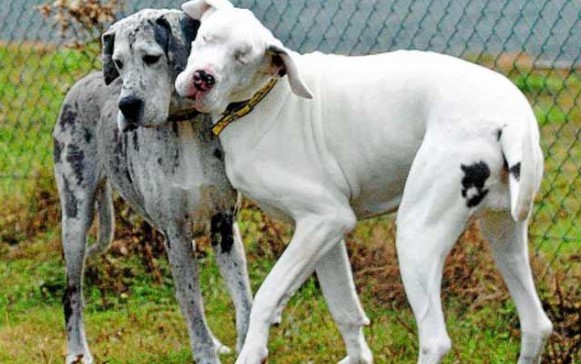 This story proves that animals are no less than humans are in case of relationships.

Lily and Maddison are Great Danes who were brought to the Dog Trust Shrewsbury in Shropshire, England, in July because their owner couldn’t care for them. When Lily was 18 months old, doctors removed her eyes after she developed a condition called entropion, which means that her eye lashes grew into her eyeballs and severely damaged them. The operation was her only option.

It was after this traumatic event that her relationship with seven-year-old Maddison developed as she took her under her wing.

Now Maddison is Lily’s guide dog. If they are out and about, for the majority of the time Maddison will lead and Lily will walk nearly touching her so she knows where to go. Maddison is always looking out for her.

They curl up together to go to sleep and they are very vocal with each other. They are very close to one another and enjoy each other's company.

Manager Louise Campbell said that Lily does all the things normal dogs do and if you saw her from a distance you wouldn't realise she had anything wrong with her eyes.