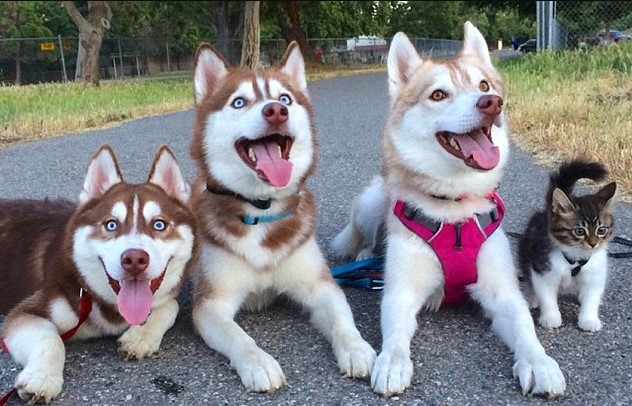 Little Rosie was just a weak, sickly and frightened three-month-old kitten when her caretakers found her abandoned and living on the streets of California. Her new owners, realizing she needed a mother figure, paired the kitten with one of their pet huskies Lilo, who raised her as her own.

Owner Thi Bui said: “The first night we got Rosie, she seemed OK but then her health went downhill all of a sudden - she rejected food and wouldn't lift her head anymore. Her eyes became infected and closed. We were providing all the human care we could, but we realized she needed a mother so we paired her with Lilo, one of our huskies”.

Lilo, the husky, took on the motherhood role instantly, even though she never had puppies of her own and never will. Lilo has been raising Rosie as one of her own and health of the tiny, lethargic and limp kitten improved dramatically and her eyes opened.

Little Rosie is growing up thinking she's a husky too. She steals dog food, follows her husky pals around the house and goes on walks with the pack.

Thi Bui said: “The two of them are inseparable - they sleep together at night, and Rosie imitates everything Lilo does… She tries to keep up with the other huskies, bless her - she runs after them when they play, she wrestles with her mother Lilo, and walks with the pack when her little legs can manage”.